I did it. I read eight books in January. Starting this quest, I figured that if I could meet my monthly goal during what is arguably the busiest month of my year (with research papers and semester 1 finals), it would bode well for accomplishing my larger goal of 100 books in a year. I’m starting this journey with confidence and enthusiasm and I’m eager to share my month in reading with you.

Going in, I never established any specific criteria for choosing the books, and my selection this month represents recommendations from friends, two online book clubs I joined on a whim, and a few titles I’ve had sitting around, always meaning to read. Here they are.

I love how some books are like memes; suddenly, everyone you know is obsessed with them and trying to get everyone they know hooked too. Elena Ferrante’s Neapolitan novels are one such series, and for a few weeks around the end of 2017, so was this stunning debut novel. My friend and colleague Susan Clark turned me on to this addictive story of humans in isolation – parallel stories, really, with one plot focused on an astronomer stranded in the arctic and another about a team of astronauts on a return journey from Jupiter. As a result of the planet having suffered some sort of catastrophic event that is only ever alluded to, both are cut off from contact with the rest of the world. You sense it from the beginning that the stories intertwine, but the full extent of this connection is so profound and surprising that its revelation adds a whole new layer of meaning – about the power and endurance of love and the cosmic connection between souls. Also, not for nothing, Pulitzer Prize-winning author Colson Whitehead (The Underground Railroad) named Good Morning, Midnight his favorite book of 2017.

As a teacher, I’m ashamed and embarrassed it took me this long to read Wonder. While I’m making confessions, I also have yet to see the movie, which is an apparently decent adaptation. This book has been fantastically popular, particularly in schools, and for good reason. Wonder offers a timely and nuanced picture of bullying and alienation, but also of courage and empathy. The story revolves around fifth-grader Auggie Pullman as he transitions from being homeschooled to attending Beecher Prep middle school. Auggie has a condition that causes him to have facial deformities that have required many surgeries throughout his young life. He is, naturally, nervous about this change, and the story follows the ups and downs of this first year at his new school. He is bullied; parents get involved in a timeless demonstration that adults, who are, of course, supposed to know better, can often be even more cruel than children. But he has allies and advocates along the way, and though so much of the story is about Auggie learning to fit into the larger world, in the end, it is his remarkable courage and indefatigable heart that offer the book’s most valuable lesson.

I read this book because I saw a tweet by filmmaker Duncan Jones (who is also David Bowie’s son) about how he was starting an online book club featuring his dad’s favorite books. I couldn’t not join that book club. I leapt at the opportunity to read some of Bowie’s favorites and perhaps, in so doing, gain a little more insight into what made him such an exceptional artist and human. Let me be perfectly frank: Hawksmoor is disturbing, scary, and utterly delightful. It tells parallel stories of 18th century architect Nicholas Dyer, assistant to Christopher Wren (and also, as it happens, a Satanist who incorporates human sacrifice into the design and construction of Wren’s famous London churches, as you do) and Nicholas Hawksmoor, 20th century detective who investigates murders committed at those same churches. Dyer is horrible, but entertaining, and Hawksmoor is a welcome force of law and order. The reader is relieved when he makes his appearance because, of course, you want that awful psycho to get his due, even if it’s 200 years later. This, however, is not what happens, and any confidence and security Hawksmoor exuded at the start quickly unravels as he is haunted by this mysterious and destructive force from the past.

4. Fire and Fury by Michael Wolff 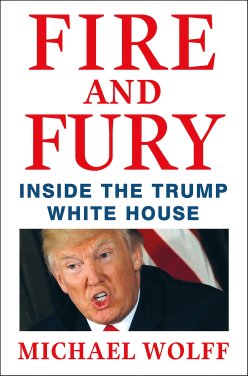 I pre-ordered this book as soon as I read the preview piece Wolff wrote for New York Magazine, mainly because I thought a whole book of various Washington insiders calling Trump an utter moron would feel cathartic or validating in some way. It did, at first, but by the end my feelings became more conflicted, for two main reasons. One, since the book relies heavily on interviews with Steve Bannon, he comes off as less than the thoroughly horrible, selfish, and destructive monster he is. Second, as I began to understand the full depravity of Trump’s (and his family’s) debasement of American democratic values, I became enraged at the craven opportunists in Congress who have allowed him to inflict as much damage as he has, and will continue to do so as long as it’s politically expedient to them.

After Fire and Fury made me depressed and anxious about our ever-hastening descent into autocracy, I needed the sort of delightfully bizarre yet relatable fantasy that only Neil Gaiman can provide. My friend Holly said this was one of those books she could read over and over again, and I soon discovered why. Neverwhere tells the story of Richard Mayhew, an ordinary, unassuming (dull, bored) young businessman who’s just trying to do the right thing when he helps a girl who’s apparently been left to bleed to death in the street. But this girl, Door (named for her telekinetic power to open any door), is from London Below, a mysterious world beneath the streets of the London Richard knows, a place inhabited by angels, assassins, ghosts, and talking animals, to name just a few of Gaiman’s unique characters. Door is on a mission to discover who killed her family, and Richard joins her on a quest to find the banished angel Islington, who will presumably tell her who’s responsible for their deaths. But Islington actually has plans to manipulate her and without giving away too much of the plot I’ll just say that this book is an enchanting trip from beginning to end, and Gaiman’s voice – by turns mystical, concise, and hilarious – does not disappoint.

I’m always on the lookout for books that might appeal to boys because, in my experience, they’re usually my most reluctant readers. This book combines two elements that make it especially appealing to that population. The first is sports. Eighth-grader Nick Hall loves soccer more than just about anything, but what really sets him apart from his peers is his extensive and idiosyncratic vocabulary, developed by his father, a linguistics professor and author of a dictionary of “Weird and Wonderful Words”. The second element that makes Booked appealing to reluctant readers is the fact that it’s told in verse – short, engaging poems that make it easy to pick up, read a bit, set down, come back to, and – not insignificantly for kids averse to reading – complete. The poems also help create a unique and compelling voice for the speaker. Nick is sullen and moody, as teenagers often are, but he’s also funny and self-aware and thoroughly likable. This book is about being a teenage boy and dealing with family tension and liking girls, but it’s mostly about the power of language and how Nick uses his to express his feelings and connect with others.

I chose this book because I kept hearing it raved about everywhere. The New York Times Book Review named it one of the ten best books of the year, and it is the first selection of the other book club I joined, a PBS New Hour/New York Times project called ‘Now Read This‘. Chapters alternate between the perspectives of Jojo, 13, and his mother, Leonie, who live with her parents, Pop and Mam on the family’s homestead in fictional Bois Sauvage, in rural Mississippi. Partly this book is about a road trip to Parchman penitentiary retrieve the (white) father of Jojo and his toddler sister, Kayla. Partly it’s an intergenerational story of the depth, complexity, and heartbreak of family bonds. But it’s also about the past, both of a family and a nation, one haunted (for the characters, literally) by racial violence and inhumane cruelty. The elements of magical realism incorporated into the novel have a theme of deliverance, or the possibility thereof, but the ending seems to suggest the uncertainty of this fate and the power of memory to echo through generations.

8. The Fire Next Time by James Baldwin

This is one of those I’ve had in my library for a while, always intending to read but getting sidetracked by other books. I picked it up now because, after reading Sing, Unburied, Sing, I decided I want to read The Fire This Time, a collection of essays and poems about race edited by Jesmyn Ward, and figured I should probably make myself familiar with the work from which she drew her title. This book contains two essays, “My Dungeon Shook – Letter to My Nephew on the One Hundredth Anniversary of Emancipation” and “Down at the Cross – Letter from a Region of My Mind”. Reading them, I was struck not simply by the eloquence with which Baldwin analyzes the origins and implications of racial tension in 1960s America, but by the chilling relevance of his dire predictions to our current climate. One example: “You know and I know that the country is celebrating one hundred years of freedom one hundred years too early. We cannot be free until they are free.”  I couldn’t help but think about this summer and Charlottesville, of race baiting and dog whistles and a white supremacist movement emboldened by the president’s overt racism. Baldwin’s insistence that racial justice cannot be achieved until white people take a long, hard look at their own privilege and complicity in perpetuating an unjust system, and until we all make a good faith effort to broaden and expand our experience and understanding of each other, rings glaringly true. For anyone committed to fighting racism and oppression, The Fire Next Time is required reading.

And that’s January! Thank you for reading. If you have suggestions for me, feel free to send them via comment or email (lkdenotter@gmail.com). And very VERY special, effusive, enthusiastic thanks to Aaron Panaligan for the gorgeous artwork. Aaron’s a former student looking forward to pursuing a career in art at MCAD next year. He has graciously agreed to create a series of 12 works for me to accompany each month’s entry. You can see more of his work on his Instagram.